Bitter is better, an introduction to salvestrols (English)

Salvestrols belong to the phytoalexins, compounds that a plant produces to protect itself against stressors such as fungi, viruses, bacteria, UV light and insects. Salvestrols have a cancer-inhibiting effect in humans. They cause tumour cells to die but leave healthy cells unharmed. The bitter salvestrols are only present in relevant amounts in biologically cultivated vegetables, herbs and fruit. People who prefer biological (unprocessed)products, are therefore more likely to be better protected against all kinds of cancer than people who choose common (sprayed) products.

Relationship between diet and cancer

English scientists have discovered an important tumour-selective mechanism used by particular phytonutrients in our diet to remove cancer cells. These phytonutrients, which have been given the name salvestrols, have largely been lost from our diet in the last decade, except from biological products.

In the early nineties professor Dan Burke, together with his research group of the university of Aberdeen, discovered an new type of cytochrome P450 enzyme, the CYP1B1, in tumour cells. In the body, cytochrome P450-enzymes types CYP1, CYP2, CYP3, take care of the detoxification of body’s own metabolites and body’s foreign toxic substances (xenobiotica, such as carcinogens, toxins of vegetable origin and cancer medicine). They are predominantly found in the liver (in support of phase 1 detoxification) and are also found in other organs such as the small intestine, kidneys and lungs. Other cytochrome p450 enzymes (type CYP11, CYP17, CYP19, and CYP21) are involved in the synthesis of substances that play a role in cell regulation and cell signalling, such as steroids, fatty acids and prostaglandins.[1]

What is remarkable about the discovered CYP1B1 protein, is that it is mostly found in (human) cancer cells, not in healthy tissue cells.[1-4] Healthy tissue cells do contain the gene for CYP1B1, but under normal circumstances this gene does not appear to come to expression, or only scarcely does so. In-vitro research has shown that CYP1B1 can activate (pro)carcinogens. However, CYP1B1 is unlikely to play an important role in the development of cancer, because the enzyme is not active in normal cells. [5] Burke’s research group found the CYP1B1 protein in all the possible types of human tumour cell lines. The extreme over-expression of CYP1B1 enzyme is a common characteristic of all forms of cancer that occur in humans.[1,5] The inducible CYP1B1 protein may be able to be used in the future as a diagnostic tumour marker to detect earlystage cancer.[2,5]

Professor Burke suspects that the CYP1B1 gene is ‘switched on’ in a mutated body cell in order to allow the tumour cell to be selectively removed (tumour suppressor gene).

Discovery of the CYP1B1 protein has lead to research of (natural and synthetic) anticancer agents (cytostatics) that are activated by CYP1B1. The agents are not (or hardly) toxic by themselves, but are converted by the CYP1B1 enzyme to toxic substances that result in apoptosis (programmed cell death) of the tumour cell.[1,2,6,16] Conversely, there also appear to be cancer medicines that are inactivated by CYP1B1, which renders them ineffective (tumour resistance). Examples are docetaxel, ellipticine, mitoxantrone and tamoxifen. [17] Current cytostatics have serious side-effects because they are not only toxic for cancer cells but also affect healthy cells and tissues. Finding safe, preferably natural ‘prodrugs’ that are only activated in the tumour cell would represent enormous scientific progress in combating cancer.[16]

From synthetic to natural

After he was appointed at the Montfort University in Leicester, Professor Burke came into contact with clinical chemist Professor Gerry Potter. Potter is an expert in the development of cancer medicines. Following the discovery of CYP1B1, he developed the first synthetic prodrug (DMU-135) that is converted by CYP1B1 to a powerful tyrosine kinase inhibitor, which effectively destroys tumour cells.[8] The active component in DMU-135 is a stilbene structure. Stilbenes are organic, bioactive substances with 1,2-diphenylethylene as functional group.

Potter and Burke wondered if food may contain similar natural compounds that are activated by CYP1B1 to cytotoxic substances. After all, it is estimated that approximately 1000 cancer cells develop in the body every day. These are generally removed rapidly and efficiently and do not lead to tumour formation. Rather than ask why people get cancer, it is better to ask why people do not get cancer. The CYP1B1 enzyme may represent a self-destruction mechanism in cancer cells, which has developed in the course of evolution (CYP enzymes are as old as humankind) to selectively remove cells that have become derailed. If this is the case, it would be logical to think that the CYP1B1 enzyme uses components from the diet to force the tumour cell into apoptosis so it no longer poses a threat. This could be one of the ways that the diet protects against cancer.

The Burke and Potter team went in search of components in the diet that are toxic for tumour cells and are a substrate for CYP1B1. In 2002 Professor Potter published research showing resveratrol (3,5,4‘-trihydroxystilbene) is converted by CYP1B1 into piceatannol, a tyrosinekinase inhibitor that is fatal for tumour cells.[1,9,10] The natural phyto-estrogen resveratrol is found in food such as grapes and red wine, peanuts, berries, plums, some pine trees and in tomato peel. Resveratrol has antioxidative, anti-inflammatory, antiviral, neuroprotective and chemopreventive properties. It was already known that resveratrol helps to prevent tumour cell formation; in this research it was shown that resveratrol also plays a role in removing tumour cells.[1,9,10]

Grapes and berries are an important source of stilbenes, including resveratrol, pterostilbene, piceid, astringin and viniferin.[11,12] Other vegetable substances similar to resveratrol, pinostilbene, desoxyrhapontigenin and pterostilbene also bind to the CYP1B1 enzyme; one source is Korean Rhubarb (Rheum undulatum).[11,13] Pterostilbene (3,5-dimethoxy-4-hydroxystilbene) has been shown to have a cancer inhibiting, antioxidative and anti-inflammatory effect and to induce apoptosis in various cancel cell lines.[11,13]

Overall, the English researchers have identified more than twenty phytonutrients (bioflavenoids, carboxyl acids, stilbenes, stilbenoids) in vegetables, herbs and fruit, with the common denominator that they all induce apoptosis in cancer cells following activation by CYP1B1. The substances form a socalled pharmacophore: a group of biochemically unrelated substances, in which the component of the molecule responsible for the biological activity is the same.[14] The researchers have called this group of phytonutrients ‘salvestrols’ (salve means to save, strol is derived from resveratrol, the first salvestrol), but will not yet reveal which phytonutrients are concerned. The generally bitter or sharp tasting salvestrols belong to the phytoalexins, substances produces by plants as protection against fungi, bacteria, viruses, insects and ultraviolet light.[13] These phytoalexins, representing the immune system of the plant, are mainly found in the peels of fruit, in seeds, leaves and the outside of roots; parts of the plant that come into contact with the stressor. Depending on whether the plant comes into contact with the stressor, it contains a small (basal) or large amount of phytoalexins. Salvestrols themselves differ in relation to biological activity, biological availability, half-life and water or fat solubility. They are natural, non-toxic for healthy cells and occur in food that helps prevent cancer. Many traditional medicinal herbs contain a high level of salvestrols.

So far, in-vitro research has shown that salvestrols induce apoptosis in tumour cells derived from brain, breast, prostrate, colon, ovary, testicle and lung cancer tissue. The results of (additional) treatment of cancer patients with concentrated extract of salvestrols are encouraging. 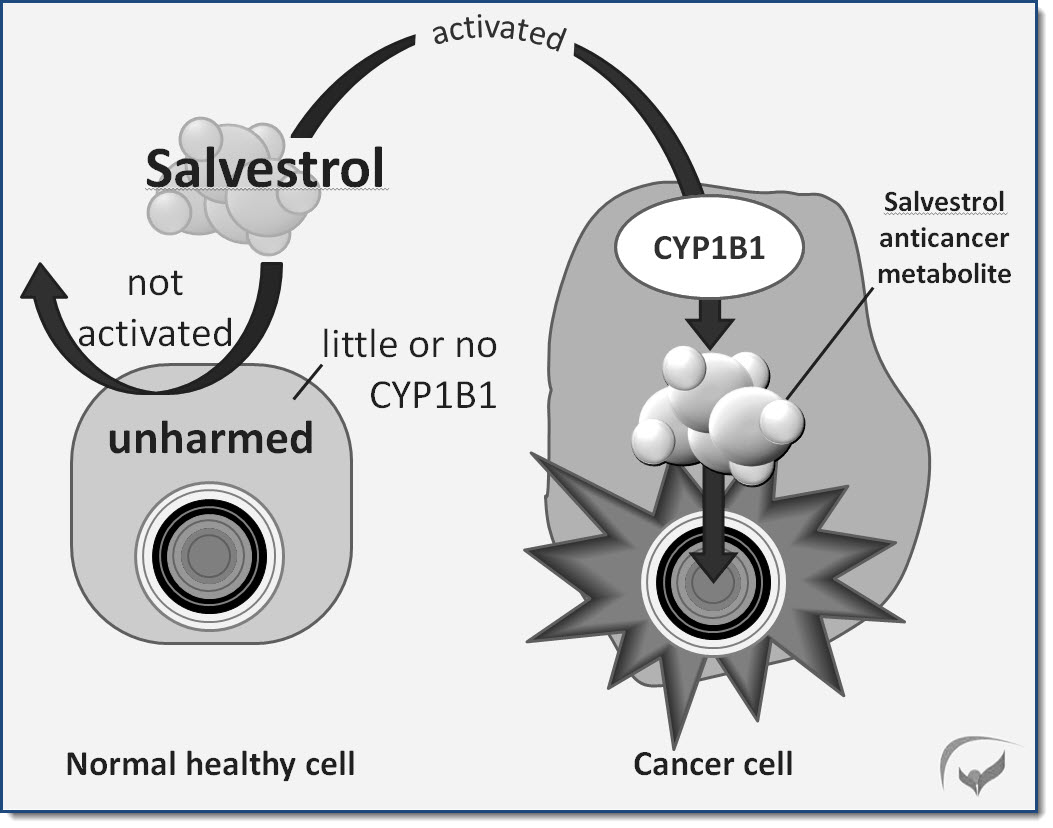 Professor Potter and his colleagues made an interesting discovery during their search for salvestrols: the level of protective salvestrols in fresh vegetables, fruit and herbs and processed food varies enormously. Pesticides such as fungicides have drastically lowered the level of salvestrols in common vegetables and fruit. Logical, because there is no longer a need for the plant to produce phytoalexins. In contrast, sprayed food also contains carcinogenic substances due to pesticide residues. In addition, plant selection and plant refinement over the last fifty to sixty years has lead to a reduction in the cultivation of plant varieties that are naturally rich in bitter salvestrols (and less dependent on pesticides). People tend to dislike food that tastes bitter and prefer to eat sweet Brussels sprouts rather than sprouts with a somewhat bitter taste. People also like to select new varieties of vegetables and fruit that are uniform in size, colour and shape and to leave older varieties and those that are less attractive, which are richer in salvestrols.

Finally, food manufacturers remove salvestrols to achieve the taste, colour and transparency of (refined) foods such as fruit juices and olive oil. The taste becomes sweeter without needing to add sugar. As a general rule, refined food contains little to no salvestrols. The research group of Burke and Potter has come to the conclusion that the present-day diet contains 80 to 90% less salvestrols than that of fifty to a hundred years ago. Only biological (unprocessed) food still contains relevant amounts of salvestrols. The reduction in protective salvestrols and the increase in carcinogenic substances in food may have contributed to the increase in cancer in the last decade.

For better protection against cancer, it is advisable to increase the intake of salvestrols by eating unprocessed biological vegetables, herbs and fruit. A project is currently underway in England in which people are searching for older vegetable and fruit varieties that naturally contain more salvestrols. Vegetables are best prepared by steaming or stir-frying; salvestrols are fairly heat-resistant but remain behind in the water when vegetables are boiled. In addition, one can use vegetable or fruit concentrates, selected for their high level of salvestrols.[15] Additional supplements with salvestrols (together with a multi and the synergists biotin, niacin, vitamin C, magnesium and selenium) and body movement (oxygen) may make an important contribution to recovery from cancer. Future (clinical) research will need to investigate this. The discovery of salvestrols is, in any case, an extra reason to choose biological, fresh and unprocessed food.